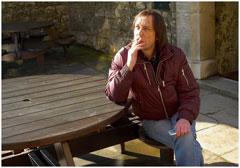 Music by A. Balchev, Text by B. Pasternak

Refined Vertinsky and is vulgar-charcoal "NEP". «Three criminal chords» and «The Three-cheap opera» zongs. A tango - from Peter Leshchenko to Astor Piazzolla.

My first endeavor into writing took place in the “Arhangesky” restaurant, not far from a museum. All the other restaurants had closed and so this was where all of Moscow's bohemia came to continue their festivities. These were some of my favorite people: Serega Bogoslovsky, Boria Hmelnitsky, Liosha Stychkin, Seva Abdulov, Vadik Milshtein, Andrey Voznesensky and other.

Galina Bregneva would show up from time to time with her entourage who would from time to time exchange writings with the KGB. Marina Vladi and Vladimir Vysotsky would sometimes show up also. All of these people were "stars" but not in the moderns sense of what we so glamorously call "celebrities" today.